This is my personal goodbye to my beloved husband, Charles Jennings. On September 11, 2018 (but I will move it back on the publish date).

As I wrote previously, in 2012 I decided to renew my motorcycle license after 24 years of not riding. A month later, I reconnected with an old friend I had not seen in several years, but had known for 12 years. (Charles’ third wife, Dianne, had died of cancer.) He was the only one who came to my third “Friendship Wall”-painting party I was having. He said he came cause he felt sorry for me that everyone had cancelled. He brought his home-baked bread. I showed him my collages. Our friendship was rekindled. We went on our first official date on April 11th, 2012, a national holiday.

He took me for a ride through some sugar cane fields in Grecia and through some lovely lemony-scented coffee fields. It was magical. After a few more times together, he said he knew I was “the one,” his “media naranja” (other half), and his “dream come true.” He soon asked me to marry him, and, much to my surprise, I said yes. He was in a hurry to marry it seems! Guess he didn’t want me to run away! Hahaha!

He bought me a little Honda 125 named “Zorra.” Hahaha! I can’t believe I actually rode it with that name, but I allowed myself to think of it as “Fox,” rather than its other meaning! I did not like riding this motorcycle for it had the new system where one shifts down to go to higher gears, and one goes from fifth gear back to neutral. I was not used to this system. 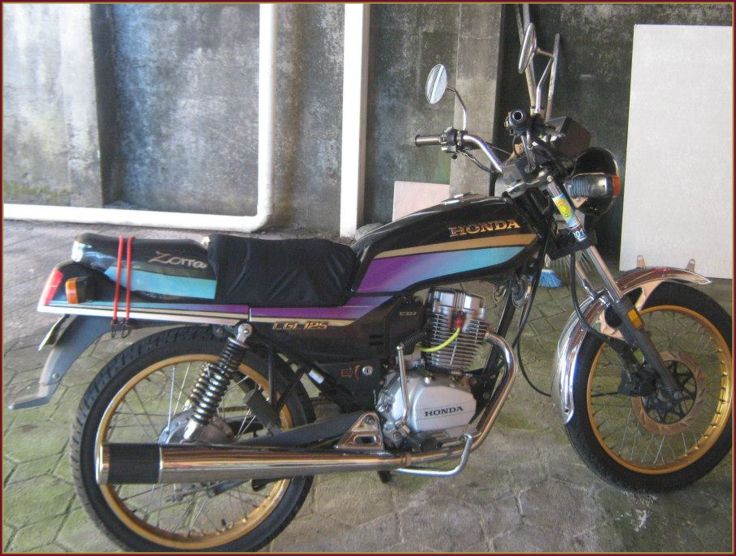 I did ride it for about a year, until we sold it and bought my Honda XL 200. Much more powerful. I was relieved to be back to the usual gear system where one shifts UP. 🙂

We had an amazing time riding around Costa Rica. 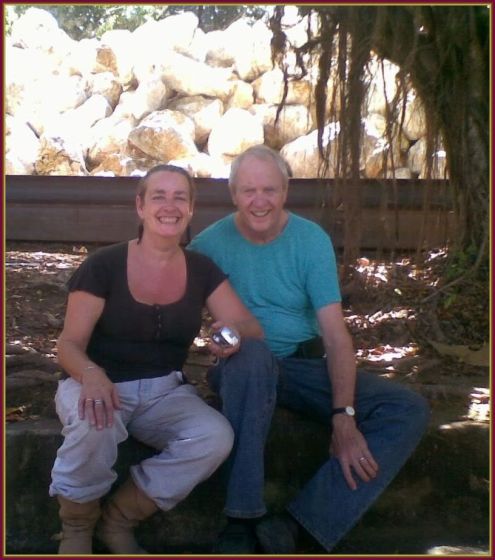 He had a Honda Falcon and a KLR 650 (and an Aprilla 400 Scooter which he sold). It was hard for me to keep up with him. I now appreciate his patience with me more than ever, for my riding has improved so much from when we rode together.  I sometimes think, “I wish you could see me now.” 🙂 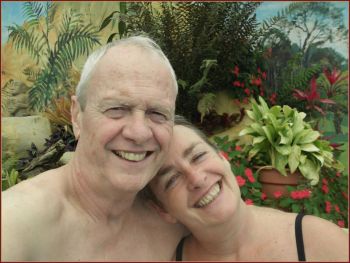 Here is a poem I wrote our second year together, one of many.

Rustling summer quiet
holds your mature skin,
all around me. In your eyes:
cinnamon, caramel, lime
patches of heaven
landing on wide, cool vistas.

The turquoise sky
strokes your back
while the rocky rivers laugh
and the afternoon liquefies
into soft honey.

Within all this and more
you run your soul across my heart,
whispering your love for me,
and the jewels of the day glimmer, brighter
there, where heaven lands
in your blue eyes. The earth of my life

turns around, finds itself,
the way the morning sun finds itself
opening the beauty of the night
into the bluest blue.

Towards the end of our second year together, I fell into some Complex Post Traumatic Stress reactions that were difficult to manage. For me, this was a shocking, hellish nightmare which I could not seem to control. Fortunately, Charles would “get under the blankets” with me, which was my childhood safe spot for dealing with terror (I would pile blankets on top of me to protect myself). We managed to walk through this distressing time and keep our relationship. Our love grew as a result.

One of the things that helped me recover from the trauma meltdown was artwork.  (Therapy, Focusing, new 12-Step groups, and a new dog also helped me come out of this!) I started making beautiful seed necklaces and driftwood collages. (See Suzanne L. Noel . com.)

Charles and I would ride all over Costa Rica looking for these pods and seeds.

We were full of joy and happiness, like little children, looking for and finding these precious seeds. I am grateful that his last year alive he was so happy and content. Even in the emergency room we were happy, because we were together. 🙂 (Someone recently complimented me by saying — after I had said how happy Chuck was his last year of life — “Of course he was happy. He had you.” I hope this is true, that I added happiness to his already happy nature!)

Charles was very kind to my mother and engaging with my son. He loved my son. This touched me deeply, for he was the first man who truly cared about Jamie, and showed him this love by relating with him and trying to teach him things. I am glad that Jamie had such a wonderful “Step-Dad,” and sad that it did not last longer. 😦 Also touching was when Chalres’ son from his second marriage realized that Jamie was actually his brother.  That was so sweet! Jamie and I lost so much when we lost him. 😦 There is still a road I loved that I cannot find! Hahaha!)

His death came fast. For this, I am also grateful. He did not suffer long. He died of Acute Myloid Leukemia on September 11th, 2016. 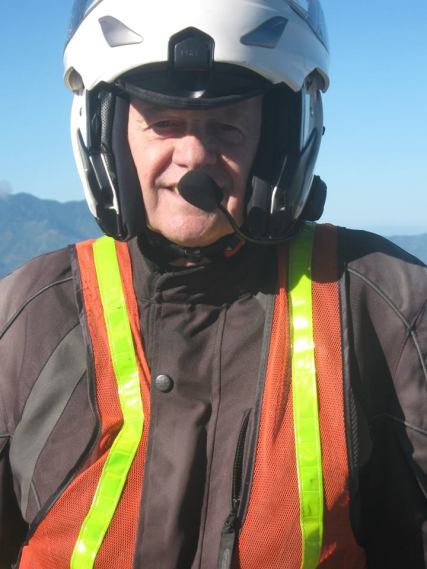 Here is a poem that captures my grief, also one of many:

IN THE ETERNAL SILENCE

The sad giant sits on her chest,
head on fist,
drearily, pointlessly
mulling over
death, life, death,
while icy rains pelt down
on his uncaring body.

The skies are dark, the rivers full.
Life has dimmed, turned to sludge.

She wants to rip out all the platitudes
from the blue skies of others,
to reveal the weeping, scared children that hide
under and behind such inanimate objects.
But, she sits alone, suffocated by her giant,
letting him mourn
in the eternal silence.

Spiritual truths and instructions
pile on top of her and her giant–
become nothing more
than reflective screens
for others to behold themselves,
spared from witnessing
their tragic helplessness.

She shakes them off
and sits with the gloom, listening.
At the end of another too-long day,
her broken-hearted soul
embraces the lonely, vast night.
Her giant breathes in
the immense powerlessness,
and they rest, surrendered,
in sacred togetherness,

Two months after his death, I forced myself to go for a ride. I knew the natural beauty would help. It did.

Though I cried a lot while riding, for his memory lives everywhere in Costa Rica for me, the riding opened up my heart to life again. It brought me so much joy that I moved through my grief relatively quickly. Back at home, the heavy emptiness would fill my body, so I had to ride regularly.  I still feel it, but I also continue to love this precious life and all live things on this magnificent planet.

Now, two years have passed since he died. I am making new friends, have started doing artwork again, and feel hopeful about the future. Riding in Costa Rica is the one thing that fills me with a deep sense of aliveness, with peace and serenity, and I have lots and lots of pure FUN!! 🙂

So today, on September 11, 2018, two years after his passing, I say goodbye to my one and only legal and spiritual husband. (He would often joke that I was the only wife he married twice, for we had both kinds of wedding celebrations, legally and spiritual.) I am ready to move into the next chapter in life.

I hope to someday embody his way of lovingly relating to others and the world. He was much loved because he engaged with people with a full heart and open mind, and he was affectionate and generous. He made people happy, not just me. He also had a delightful sense of humor.

Goodbye Charles, my love! Thanks for your love and most of all for the Honda XL 200! 🙂 You returned to me my fun!

I happily ride all over this gorgeous country and await my next adventure. There is so much love in happiness. May I continue to seek and find my happiness so that I can brim with love and have a full and thankful heart!

This was my song for him and one of our wedding songs: Baby I’m Yours. (Sadly, until he died. )

And, as Nina Simon sings, life is born anew each day: It’s a new dawn, a new day, for me. And I’m feeling good!

Me, I just want to LEAP into my future! Or keep riding into it! 🙂 I will start by taking a ride this morning, after a workshop I am offering, and I will thank the universe for all the gifts I receive from its bounty! 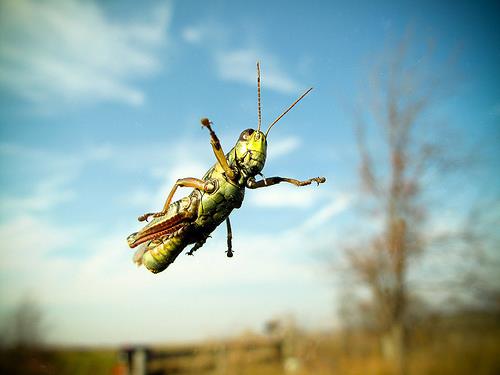