Today, I felt insecure all morning on the bike. My body was sensing something that my mind could not figure out.  Nevertheless, I went to Puriscal to buy hand-made Christmas cards from an artist. After that and after breakfast, something did go wrong. I was shifting, but nothing was happening. I had to roll it down the mountain.

Fortunately, I rolled it right down to a restaurant at the junction to San Pablo de Turrúbares, where there was a nice pirate taxi named Oscar. People often tell me it is dangerous for me to ride alone. “What if something happens?” they ask. “Well,” I say, “Chances are someone will come along to help.” Oscar was the angel who helped me today.

Oscar called the local mechanic, who said, “Wait, that happened to me once. Check the pinion.” And so Oscar took out his tools. Yep. That is what it was! Fortunately, a few months back, a guy had opened up a motorcycle parts store in San Pablo. Go figure! Yay!
Off we went, Oscar and I, to buy the piece which was only $3.50. Seems too cheap. 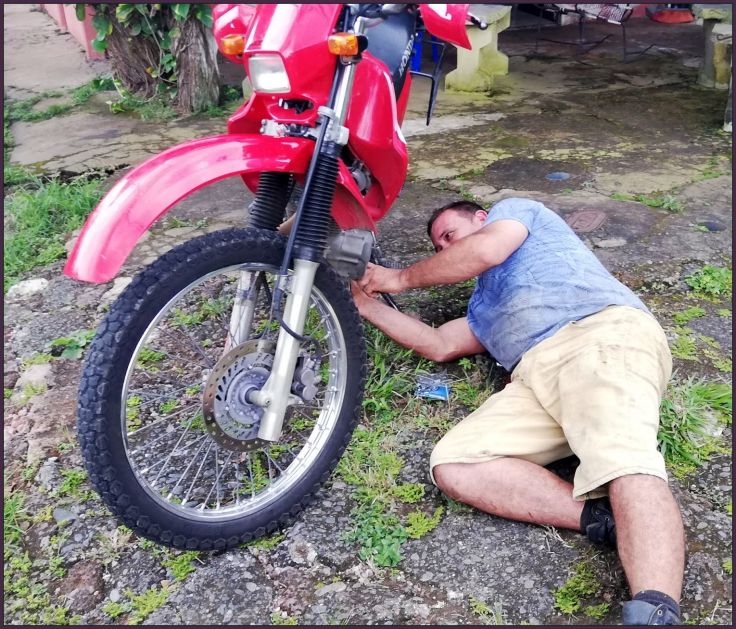 After that, I enjoyed riding on wild route 707, which I have called my lonely road in another post. I enjoyed it today, lonely or not! 🙂

This Route 707 has that old bridge built in 1929 that has zinc on  it and at the end of which there is a big rock one has to drive up. I have posted about this before.

Right before Route 707 goes right to parallel 27, there is this section which was a pile of rocks after Hurricane Nate last year. It was a bit scary for me to drive through it.

Route 707 then crosses over Route 27 and continues through Guacimo to Atenas, as I shared in a recent post. I want to take it one day to Calle Escobal, to go to Barroeta, then up to Highway 3.  (Link to Map.)

I did get caught in a downpour on Rt 27.

The weather cleared after Atenas.

So, I am home. Safe and sound. Realizing my bike is starting to become unreliable. It’s had an intense life these last 6 years with me! Lots of adventures. 🙂 I need to keep looking for another. I need to trust that nothing will happen when and if I do take those roads that seem to be in the middle of nowhere.

Song: In the Arms of an Angel  – and – Heaven must be missing an angel.