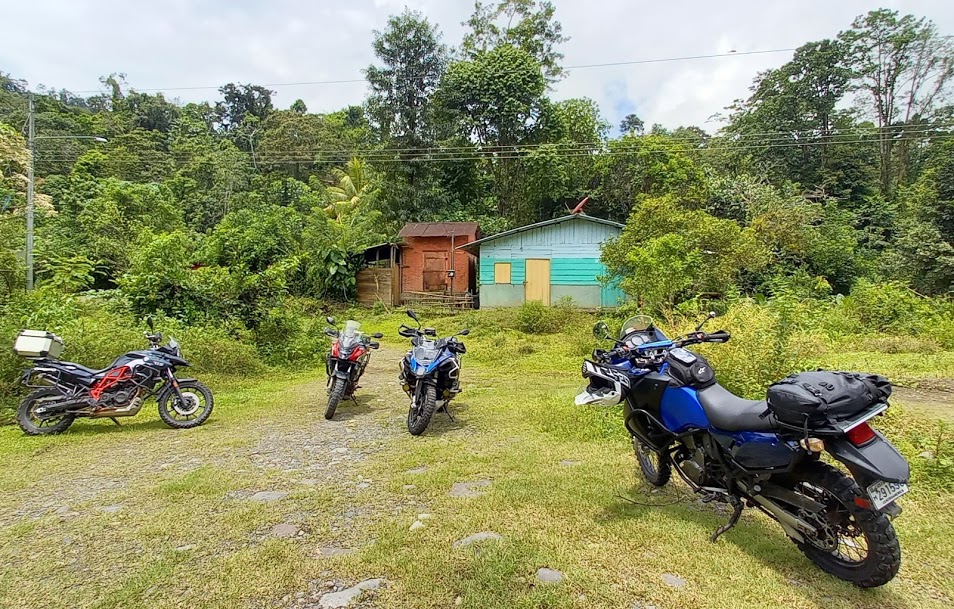 I have taken a lot of rides this April, but have not been in the mood for posting on this blog. Hahaha! I guess because many of the routes are not new. I will write two posts to cover some of them so that I have glimpses of them for my records. In this post I want to cover last weekend’s rides. As I think about them now, I once again feel so lucky to be having so much FUN IN THE RAIN AND SUN!! Yay! How lucky can a girl get?!

On Saturday, April 17th, my friends Althaf, Robert, Ignacio, and I went to route 415 via the road that goes to Guayabo, to come out at La Herediana and route 32. The road to Guayabo is now 99% paved. Only a few kilometers are not.

We met at Mall Santa Ana and had breakfast at El Sapito restaurant on Route 230 (freshly paved as well), where our friend Bernard joined us for coffee. Truly an international group! German, Indian, Tico, Dutch, and yours truly! Love it!

I have no photos of the road to Guayabo, which I love. So quaint and picturesque! Though it was foggy for us. We enjoyed 415, which is one of my favorite routes. Wild! By the way, the sudden drop offs have been fixed. 🙂

From 415 we took a detour to check out a place called Bonilla, which ends at the Reventazon River with an ICE installation. Because I was not feeling brave, we did not ride further on. Althaf was kind to honor my wishes, though I would have been happy to wait for them while they checked it out.

It was great to ride with the Off-Road group again. I enjoyed it so much. We rode in the rain coming home on route 32 — and once in the valley, the downpours were incredibly heavy. The last hour home across the valley was full deluge! This rainy season has hit Costa Rica hard!

Then on Sunday, April 28th, I ended up joining Felix Franco and his off-road training group. I had canceled going to take care of my car, which was at my son’s house with a dead battery. But as I rode down to Orotina to meet them, to give Felix my new “Rejuntados” sticker, I thought to myself: Why not?! Hahaha! No surprise!! Why not take another ride!?

We first went to the costanera then to the Tulín river. This road is mostly paved towards the river, then easy, compact gravel. I enjoyed riding with Felix because he is a fast rider. Love it!!

Storm was super happy to be riding again, since I have been neglecting her for Sahara. 🙂

After the river, we headed over to route 239 (also in good shape these days) for breakfast at Soda Pura Vida before heading out towards the Eólicas de Santa Ana. Route 239 has amazing views!!

I was delighted to finally do the route up to the Eolicas (electricity-generating wind mills) of Santa Ana. I affectionately joked that if my friend Bernard could do that route, I could. Hahaha! I was not prepared, however, for all the ruts created by the heavy rains of the last week. Hahaha! The route was rutted and rocky, but Storm was fine happily riding UP and up! I wanted to stop for photos, but it was not appropriate to do so, since we were trying to beat the rains.

Here is a video of us nearing the top where the road was smooth — with the obligatory local motorcyclist riding past us on his small motorcycle with his girlfriend in the back. Hahaha! It has happened so often in the most challenging places! They ride by as if nothing. Piece of cake!

We made it up without incident, then rode over to the paved road to the higher windmills. (But we turned around when it started raining.) I don’t think I would dare do this route further on in the rainy season. No way!

Once past Santa Ana, I was grateful the rain let up and the rest of the trip home was dry.

I was also touched to the heart when Felix complimented me to the Rejuntados! Hahaha! It’s a human need, I suppose, to get positive attention. Hahaha!! For it truly made me happy. (Even though we both know I need a lot more improvement in my riding skills, especially turning!)

RIDING IN COSTA RICA!
FEEL THE BEAUTY. KNOW THE LOVE. LIVE THE POWER.